As I was soaking some dried fruit for Christmas cakes and puddings I thought about how much more important it is to look for frugal options these days. And yes, I know most of you have made your Christmas cakes already. I’ve been soaking fruit in November and making cakes at the beginning of December for some years now … no one has complained yet … grin …

As I was stirring the fruit and alcohol, I was reminded of a pudding recipe that I  inherited from my Scottish aunt who had probably used it since WWII rationing. Half Pay Pudding was made all year round but by making it slightly richer it makes just the best Christmas pudding.

3] Pour into a greased pudding basin, cover with several sheets of waxed paper tied around the lip of your pudding basin with string and steam in a covered pot half full of water for 3 hours. [I use a Pyrex bowl as a pudding basin … anything heat resistent that will hold 3 cups  of mix and a bit of room for it to rise]

4] Turn out onto a serving plate and serve with  brandy butter … oh, sheer luxury … or lemon sauce, ice cream etc.

Take the recipe above and substitute 1/2 cup of sugar and 1.5 cups of mixed fruit that you have soaked in the liquor of your choice.

Note: To make a large family size pudding use a mug instead of a tea cup and double the amounts of baking soda and spices. The recipe is very forgiving as long as you keep the ratios consistent.

Check the water in your steamer from time to time, adding as necessary.

The Last Breath of Autumn

The winds and the rain have come leaving their calling cards of leaves and puddles in the garden.

I planted garlic at the beginning of the month in a large black pot and settled it on the south side of the house under the roof over hang in an attempt to outwit the incessant rains of November. I’ve covered the pot with straw as a sort of mulch and winter blanket. Now the cat thinks he can stand sentry from the straw covered centre of the pot. We are in deep negotiations over this … grin.

The garden still holds treasures beyond the golden leaves. There are red and green cabbages to be harvested, brussel sprouts awaiting their first frost and carrots and turnips testing the damp earth. Will they or won’t they rot?

A great patch of chard defies all comers including the herd of baby slugs whose DNA has been programmed with a map of my garden. Shortly, I will marshall my army of hens and victory shall be mine … or rather the hens …

A myriad of herbs – rosemary, sage, thyme, oregano, curry plant and garlic chives have been re-positioned near the back door for easy cropping over the winter.

The African basil and the Italian basil plants have shivered and moved indoors. Little do they suspect that they will become pesto soon. There is something quite decadent about having fresh pesto in November … smile … especially in the Pacific Northwest.

I have made Dutch apple pie from my very first crop of cooking apples … a comforting treat for a cool autumn evening.

Each season has its beauty and its challenges but my soul favours autumn. S.

It is now undeniably autumn. Morning temperatures are in the 45/50 range [8/10] and one morning last week there was a skim of ice on my car window. All the lushness of the summer garden has been replaced by dying masses of vines. The blueberry bush leaves have turned a bright read and the soft fruit leaves are mottled with autumn shades of yellow, orange and red.

The maple trees that hover at the end of my fenced garden are showing signs of leaves turning yellow and rust. The next big windstorm will bring them all tumbling onto my garden space.

Once I have cleared out all the debris I have promised my girls [chickens] that they can have a good scratch in the garden. We have had serious words about them not touching the cabbages and brussel sprouts unless snails and slugs are involved … and they will be …

There will be lots of kale for the winter but no chard. Even though I replanted it several times across the summer months it never really grew.

I am experimenting with overwintering  a few carrots and turnips in the ground … root cellaring in situ … but here in the Pacific Northwest we get so much rain from November through March that it may not be possible.

My initial reaction to this year’s garden was that it was a very poor one but now I am thinking that it was just a different year. While there were hardly any summer squash, zucchini, cucumbers, lettuce, and rhubarb, there was an abundance of beans, tomatoes, turnips, plums, apples and soft fruits …. blackberries, strawberries, blueberries, boysenberries, raspberries etc.

Did you have a great garden this year? … S. 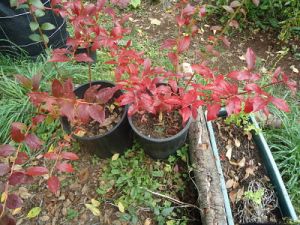 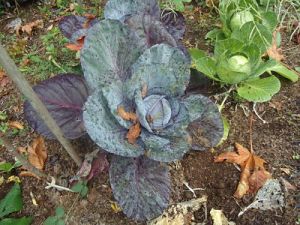 I have spent the week harvesting beans and tomatoes for the freezer, making plum jam and reducing several crates of transparent apples to applesauce both canned and frozen.

Almost the last of the blackberries have either been frozen for apple and blackberry crumble in the months to come or made into jam or pancake ‘syrup’.

This last month the weather has been stunning … unseasonably warm for the Pacific Northwest with mid-day temperatures reaching 31/92 degrees.

The garden has recovered somewhat from the long, cold spring and early summer. I’ve been able to harvest a great crop of beans of all kinds, broccoli, dill, a few cucumbers and many tomatoes.

I’ve dug potatoes … a modest crop … and picked blackberries for the freezer. I’ve begun to harvest the plums … exciting because this is my first fruit harvest on this property.

But the unexpected surprise this week was a 1.5 lb. beefsteak tomato. I couldn’t resist weighing it. Smile …

Wishing every other gardener similar end of season triumphs …S.

The Bounty of Autumn

I hate to admit it but this week the garden has begun to look autumnal. It is that subtle sense of less green and more gold and brown. Of course the cooler mornings and evenings may well have influenced my perception.

The potatoes were dug this week and put in the root cellar. Tomatoes, beans of all sorts, broccoli and blackberries ripen daily. I, who thought I would be zucchni-less this year, have been blessed with at least half a dozen beautiful samples along with double that bounty in gorgeous yellow summer squash.

The Italian plums are purpling nicely and the cooking apples have red cheeks. 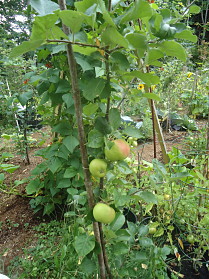 In Praise of Summer Squash

Yes, I am talking about the much maligned zucchini and its cousin the yellow crook necked squash. It is a cause for gentle ribbing around here that if you can’t grow zucchini then you can’t be much of a gardener.

Due to our long, wet, cold spring and early summer I thought that I was going to have a zucchini-less year … but … two of the previously sad little plants have shot ahead during the last couple of weeks sun and heat … so summer squash will indeed happen this year … grin …

1 or 2 cloves of garlic, chopped

Saute all the vegetables except the basil and tomatoes in a big stove top pan until they begin to soften. Oil a 9 x 13 in casserole dish. Arrange all of the vegetables including the tomatoes and basil in the casserole. Top with grated cheese and bake for 15 – 20 minutes in a 350 degree oven.

If it is too hot to turn on the oven where you are cook the whole dish as a stove top meal. I’ve even bundled the whole works up in a big piece of tin foil and done it on the BBQ. I’ve also added some chopped spicy cooked sausage to the mix. The recipe doubles easily if you are cooking for a crowd.

My personal favourite is jalapeno cheese but enjoy however you make it … S.

My Most Devoted Fan

I came home from a walk with my friend last week to discover this deer and its more reticent friend happily munching on my French sorrel which grows both within my garden fence and outside of  it.

Here on Vancouver Island, British Columbia we must fence our gardens or expect to share much more than the odd nibble. The deer and its mate move though my half-acre property at least once a day on their route down the hill to the ocean to get salt.

After two weeks or more of rain including days of torrential downpours and unseasonably cool temperatures [ 18/66 degrees today] I took advantage of this morning’s small break in the weather to survey the damage in my garden.

All the plants have survived but many of the soft fruits have rotted before ripening. Other plants have been severely battered and are now more than a month’s growth behind a ‘normal’ year. This may end up as a zucchini-less year.

The damp weather has brought out a battalion of slugs. They have severed main arteries on my squash and cucumber plants and ripped the faces off dozens of petunias. While they continue to munch happily on broccoli, chard and turnip leaves I have increased the paths of crushed egg shells and tightened my personal battle plan which includes wading through the  ‘jungle’ of foliage collecting them one by one. The local geese love them…. grin …

It is family barbeque season here on the  BC coast. We had a dry run … first of the season … barbeque yesterday… any opportunity to use the word ‘dry’ here on the ‘wet’ coast is terrific … smile …

The sun shone. The temperature raced up over 25/80 degrees. As the day progressed the garden showed signs of recovery from the torrential downpours of the last few days … all was beautiful.

I scoured the garden to see what it could contribute to the menu. There was curly leaf lettuce and herbs for a green salad. The tomatoes and cucumbers came from the Errington Farmer’s Market. There was lots of dill, garlic chives and parsley for the potato salad. My girls [the hens] contributed half a dozen eggs to that dish. 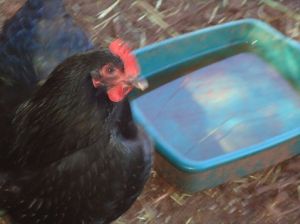 My nephew got to preside over the barbeque handling meat and vegetarian options as requested. All the rest of us got to hang out and enjoy the beverage of our choice. There were several people who insisted on coaching … grin …

So are we ready for the Canada Day/Independence Day holidays this coming weekend … You bet we are … grin ….